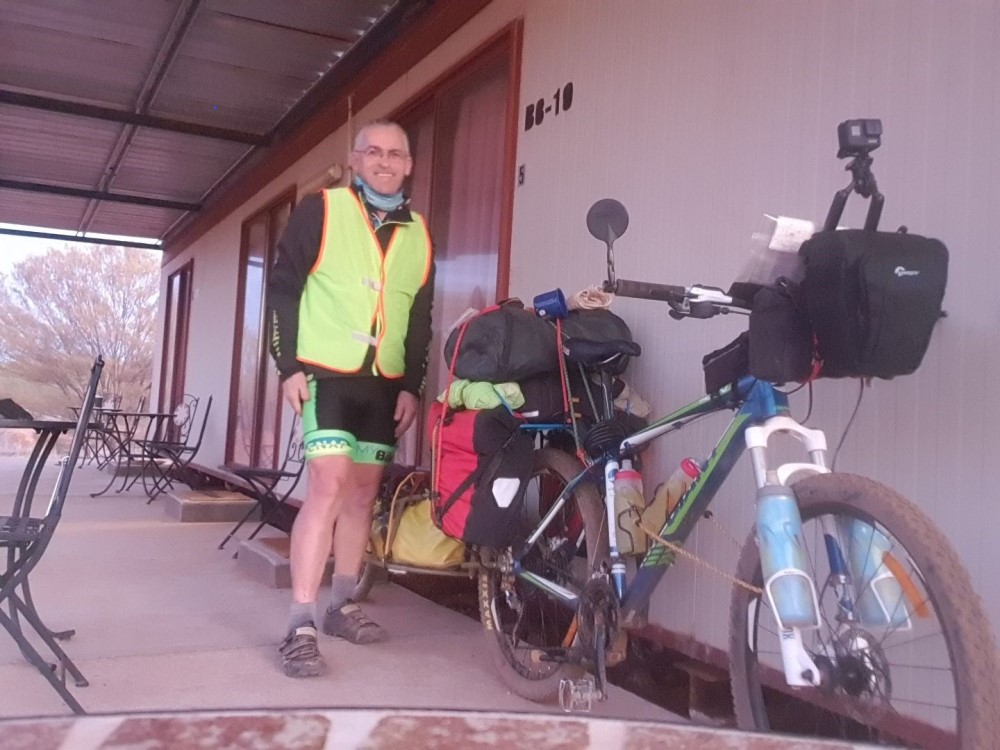 I remember when I did my first trek in the Himalayan Mountains, we would walk for three days and then the fourth day would be marked ‘Rest Day’.  This wasn’t a sit around all day with your feet up, it was walk for four hours higher to acclimatise and then back in the afternoon for a rest.  Well the same applies for me.  My rest day consists of washing all my dirty clothes, (oh they are filthy) and taking a long shower (body wipes can only do so much).

After that, I unpack all the gear and move it into the now new areas for the next stint.  I put the food in the panniers, and make sure all the riding gear is set.  I buy more water, a couple of sports drinks (nice change from water) and some fruit if available.

That’s an all afternoon affair, have dinner, go over the map, check the upcoming kilometres and look at where I’ll be stopping.  With that all done then – one must get a good night’s sleep.

After 3 days of riding you start to get a feel of what has to be at hand while you’re riding, when you stop to camp for the night and the rest which you won’t need until you have another rest day.

Because I wear two bike jerseys (it has been quite cold) I have six rear pockets to put gear in.  In the inner pockets I have my lunch (Tuna flat pack and a spoon) a peanut butter slug (just the best) and a gel (if needed).  Now the front three pockets I put my phone (for pictures only as there is no service out here) my SPOT (safety transponder – it shows where I am) and in the extra pocket I often put in a bottle of water.

In my panniers are my camping on the side of the road kits.  I have even written a little cheat sheet of what items I keep in the left and those I keep in the right.  After a while you get to know what’s there.  There has to be and order,  as it takes about two hours to have breaky, clean your teeth, wash up, fold up all the bedding , tent and gear repacked ready for the day’s ride.

In my rear centre carrier, I have a puncture kit, leads for charging phone and Garmin from the solar battery, small first aid stuff and a small wallet with some cash (you never know – you might just run into a café on the side of the road in the never never ha ha).

You can see why there has to be some routine and a need from some order in packing, setting up, using and repacking.  There have been a few times I need something and it was packed in the yellow trailer bag (my rest day gear) and you certainly learn big time to think ahead because the process of untying all the straps to find what you need and then re-strapping is so time consuming.

On the front is a 4lt bottle of water and the front bag has my tablets, wipes, tissues, glasses cleaners, fly repellent roll-on, small tube of leg rub and another small wallet with some cash, this bag is the easy to get at bag.

When you look at the photo of the bike and trailer ready to roll, hopefully it may answer a few questions of what is what and where.

TEXT MESSAGE FROM KENNY – EARLY IN THE DAY:

“At about 50kms into my ride all the texts came through.  I’ve been blessed this morning got to Atitjere 6 mins before 12:00 the shop shuts until 2:00.  78.2kms and was all sealed, so lucky the last 20kms was sealed in Feb 2019.  Now the dirt begins.  Having lunch in the shade of some trees.  Topped up all my water, got a couple of Powerades for tomorrow.  Chat tomorrow night xxxxxxxxxx”

After my lunch at Atitjere, I was lucky to have another 5kms of bitumen before the dirt.  The first kilometre was a mixture of sand and corrugations, not one reasonable flattish bit of dirt.  You need to slow the pace down and ride the waves.  Not all corrugations are spaced the same, they talk about the different frequency of corrugations.  As you ride you keep looking for flat sections, not the sand, I learnt big time three days ago, (SAND IS NOT A FRIEND).  I’ve learnt from D2B (Darwin to Broome Solo Cycle) that corrugations have a harder base so much easier to ride with a loaded trailer than any sand.  Stay in a straight line as much as you can, careful a rock or two will through you off line.

The sand is the hardest because you have to put much more effort into peddling and that becomes tiring, kilometre after kilometre.  Did I mention never stop for a drink break in the sand, wait for a hard section because it’s so hard to start in the sand.  I average about 10 minutes per kilometre and it could be 10-15 minutes before you can stop for that drink you wanted a while ago.  Never try drinking while you’re riding, you need both hands on the bars at all times, and you can’t afford to drift off your line.  Funny even if you take your eyes off your direction you will swerve.

The harder sections I can go a little quicker but you have to keep a wary eye out for hidden sand or the dreaded bull dust.  I was indeed lucky I had only one section of bull dust today.  It was like going through a powder bowl but with a sensation of glue. It was way deeper in the middle than I thought it would be.  The bottom of my peddle stroke was in it, just so dusty.

The road was straight and I could see in the distance, about 2kms, a caravan turning off.  I assumed by my calculations this was the Binns Track turn off, Arapunya Road.  Funny how deceiving the distances are, it was nearly 3kms and when I got there I noticed the caravan couple had set up camp for the night.  I pulled up, it was about 3.17pm, I had completed 103km and was thinking I would keep going at least another 10kms, that way I would have less to ride tomorrow.

Then I heard a voice, “would you like to have a cup of tea with us.”  Looked at my clock and then thought, absolutely that would be lovely.  Robin and Kate Noakes from VIC, 2 extremely beautiful people.  We drank tea, ate fruit cake and dried apricots, a real treat for me.  We chatted, exchanged details took some photos and I was on my way.  I’m amazed how many people know about Bravehearts, as did Robin and Kate.  But then there are a lot of people who don’t.

Riding the next 10km was physically tough but thinking about the break I just had made it mentally easier.  Looked at my Garmin, it was 113kms and 4.56pm.  Time to look for a safe section to stop on the side of the road and some trees so I could lean my bike and trailer against.

It was then that I hit a huge set of corrugations and after hitting one of them I could feel a massive pain in my lower back, my right foot when numb, and then, I had no feeling in that leg at all and fell over on the road.  As I slowly got to my feet, I was relieved that only my foot was completely numb, but my back – OMG.

I started dragging my bike and trailer off the road onto the side which was sand.  The bike fell again.  So I sat for a minute thinking how will I pull it all apart and set up camp off the road bit by bit.  Then along came a couple of NT Ambos, who helped me move the bike and trailer fully intact up to a tree.  They made sure I had plenty of water and food.  And off they went.  I didn’t say anything to them because this pain has happened before and comes with my previous accident.

I set up camp, made a cuppa, had my hot beef stew and a bottle of water.  By this time I was in a great deal of pain and had some serious thinking to do.   Rest, I just needed to lay down and rest.  I knew I was in trouble, I knew not to panic, don’t make any rash decision after riding all day.

Looking up at the stars, listening to the out-and-out silence of the Outback is something every person should experience.  I believe the bush spirits will guide me.

Days 1 to 3 – Alice Springs to Gemtree

Day 5 cont.. to Day 6 – The Plenty Highway to Atitjere Store