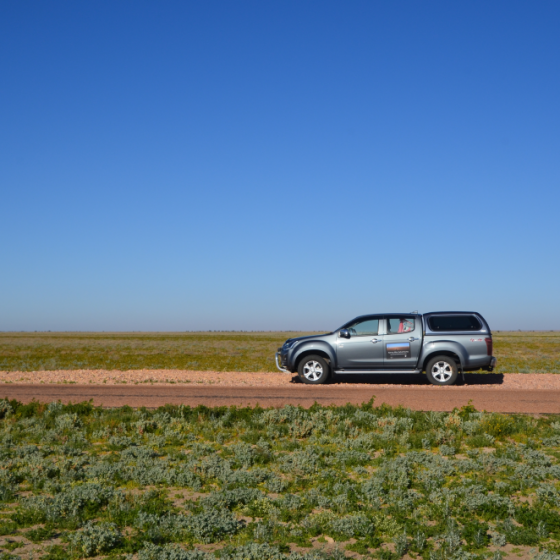 Off to Bedourie this morning.

The wide red desert has patches of green and yellow springing up from the recent floods in the region. The channel country at its best. The wind has been blowing a gale all morning and has been collecting dust, by late afternoon it was quite brutal. Bedourie, meaning ‘dust storm’ has lived up to its name today.

I stopped at every tourist spot and other interesting ‘Kenny Mac’ spots for a photo. The dust in the air, while taking photos, was at times like sandpaper on your face.

So many cattle road trains again today, all triples. There was one parked outside the service station at Bedourie at lunch time when I arrived.  I tried to erect my tent several times, without any success. Then a couple of my tent container bags blew away in the wind, omg! I went chasing them and luckily I finally caught them, they were stuck in a small bush. With my failed attempts at erecting the tent – off I toddled back to the Tourist park boss and asked if he had a vacant room for the night. I did the paperwork, paid for the room and that’s when I noticed another three cattle road trains were parked outside. The four took up the entire block.

Here at the Oasis, they have a number donger cabin rooms, nothing fancy, a rectangular box with a wardrobe, rusty fridge, rusty air-con and a bed. The best thing is there are no gale force dust storms. I grabbed some of my ‘Flat pack Tuna’ meals as usual and sat outside on the veranda for a late lunch. Two chairs and a small table, which happened to be covered in fine red dust, that had to be cleaned off before I put my butt on the seat and food on the table. Funny, after lunch I went for a walk around the town, only three by three blocks. When I got back the table and chairs were covered in dust again. Must be extremely difficult for the locals to live with this dust year after year.

There are two pubs in town, one down the end of town and one in the servo. I decided to have dinner at the servo pub, only a one hundred metre walk away and in this wind that was fine by me. The meal was exceptional, typical country meal, big plate and full to the brim. Quite expensive but hey, we are out in the never never. There was an old jukebox in the corner and one of the locals played all the country love songs and truckin’ songs, reminded me of one of the American country movies.

Off to Birdsville in the morning.

Beauty of Our Outback

Debris from the March Floods

One of many Sand Dunes

Tropic of Capricorn on the other side of the Simpson Desert

Ready for my drive today I ventured outside, lots of wind no dust but bitterly cold, coming from the south.

Today I was heading for Birdsville, deep in the middle of an isolated country which is situated between the Simpson Desert, Gibber Plains of the Sturt’s Stony Desert and the Channel Country.

The road from Bedourie to Birdsville is a mixture of bitumen sealed sections and dirt (not nice corrugations and sand). Just before Birdsville the grader was working and there was about 5kms completed and was the smoothest dirt road I’ve encountered so far.

I was at times stunned when what I thought were small mountain ranges ahead of me in the distance turned out to be sand dunes, many kilometres long. The road would cut through one only to see another and another.

I stopped at all the tourist spots on the travel brochure. Probably the most amazing was the Carcoory Ruins – One of the first properties Sidney Kidman purchased in 1899. It’s still standing and quite beautiful, oh with the exception of the travelling tourists who have carved their names and other things into the walls of sandstone and concrete.

Reaching Birdsville today Day 17 – 19th Aug, I was now back on schedule of my original A2A itinerary. Driving into town brought back memories of when I was here at Christmas and New Year in 1976, omg, 43 years ago. Not much has changed, just a bit more modern.

Artwork in the Bush

Artwork in the Bush

Floods have greened the countryside

Found a nice outdoor setting for a break

In the middle of no-where was a man

That man again now in Birdsville

The Man again on a photo mission

Beauty just goes on and on